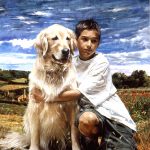 Animal portraiture in London can be just as eye-catching as human portraiture, and can also be even a bit more appealing. This is especially true for animals in the wild. Such portraits can help us see a side of them that we don’t often see, such as the innocence in their curiosity or even accentuate and exaggerate a simple pose such as when a wild cat is preying on an antelope. Either way, it helps capture the moment in time and preserve it in a way that evokes emotion that a photograph may not. As good as he is in human portraiture, and is quite renowned in that sector, Rob Hefferan also brings his animal portraits to life just as well as he does for his human subjects.

Rob Hefferan challenges our cultural frames of reference and inspires us to see beyond what we know and are accustomed to. In London, animal portraiture is not compromised as he keeps true to his nature of experimenting with themes, moods and styles in order to create visual statements that are thought provoking. From the simplicity of a baby chimp holding onto its mother to the majestic nature of the great savannah and jungle beasts that are elephants, his portraits draw you in and capture your attention the way no one else can. Perhaps his most well-known animal portraiture collection is the equestrian collection, dedicated to the horses. Rob has always been fascinated by these noble creatures and strives to capture their true essence to the very last detail.

There are many out there but no one does animal portraiture in London quite like Rob Hefferan. Contact him today and be the proud owner of one of his masterpieces. Rob Hefferan’s work has been referred to as eminently understandable and intensely familiar. His work resonates with the vibrant life through and through. Commission a portrait from him and see your ability to appreciate the innate gain a new perspective. He is also available for wedding portraiture to serve as a constant symbol of the love for the bride and groom on their special day.